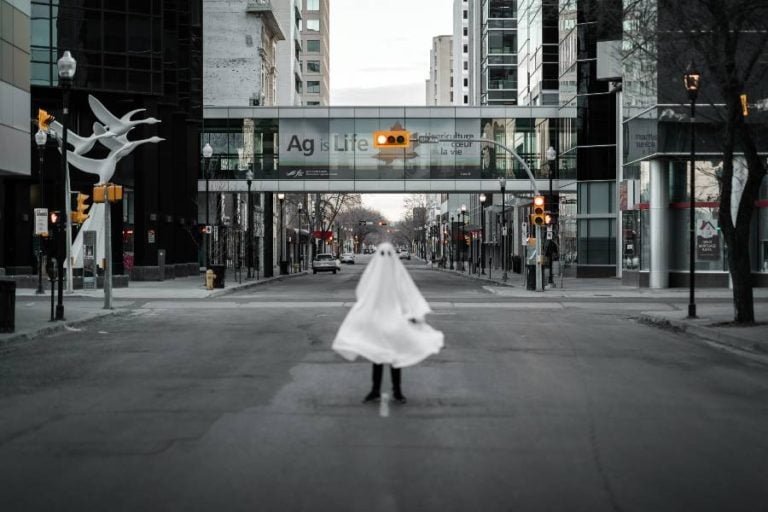 Who doesn’t love a good ghost story? And if it takes place nearby, all the better. Today in Richmond you’ll hear familiar ghost stories of the Haunted Swinging Bridge, the Devil’s Driveway, and many farmhouses full of spirits. But what kind of ghost stories were people in Richmond telling a century ago?

I looked into the Richmond Item’s archive to uncover ghost stories from yesteryear. Enjoy these reprinted accounts of ghosts in Richmond. Can you imagine newspapers publishing these kinds of ghost stories now?

A ghost which has appeared frequently la striking terror into the hearts of the girls and women and the more timid of the men working nights at the Starr Piano factory. The phantom has made his appearance for the past week between the hours of 6 and 8 when the employes are going about their work. The spirit has been seen several times in the lighter parts of the shop and on approach of any one it flees to some darker parts of the factory which are then idle.

There are several descriptions as to the dress and size of the spirit. Those most alarmed credited the ghost with being very tall, without arms and having an unusually small head, in which are two remarkable eyes, which throw off a light comparable to that given by pocket-flash lights.

Another employe, who has seen the spirit on different nights says that the phantom each time was dressed in white and is without arms or head and his description of the eyes tallies with that given by others.

On one of his visits the ghost met a reception from one of the watchmen. The watchman saw his white form in the doorway leading to a covered, bridge between two of the buildings. Drawing his revolver he proceeded to the door only to see the ghost moving at an astonishing rate of speed across the bridge. The watchman fired twice at the retreating figure and then went forward to see if any damage had been done. The ghost was, not to be found but the bullets were found imbedded in the side of the bridge.

The ghost has been seen in various parts of the shop but mostly in the vicinity of the covered bridge leading across the street from one building to the other and in the door of the engine room. The employes have leagued together and are determined to get the phantom.

“To see or not to see, that is the question.” So might have spoken Hamlet had he been out on the Cart Road, northeast of the city, last night.

And if Hamlet’s eyesight was no better than that of hundreds of Richmond folk who were there the answer would have been “not to see.” For the ghost, much discussed for the last week, failed to appear. Sunday night, too, in spite of a large audience, the temperamental spectre refused to do his stuff.

Report and rumor and story, current about the city for the last few days, have it that an unearthly being was seen several nights along the east fork of Whitewater. No one, however, seems to take the credit for first seeing the strange figure.

Although the Item reporter attempted to locate someone who has seen the ghostly personage, he failed. The nearest to first hand information that was obtainable was from one individual who declared that “my cousin said he saw it the other night.”

According to the best information available a taxi driver was the first to report the spectre. He is said to have declared that a white figure approached his car while he was returning from taking a country passenger home. The driver, upon seeing the ghost, proceeded to “step on the gas” in an effort to go away from there, it is reported. But this move was to no avail. The fearsome thing let out another notch and kept right alongside. Finally, according to the story, the filmy shape melted through a fine mesh wire fence and disappeared.

Some reports have it that the spectre is nine feet tall and broad in proportion, while others aver that it is nothing of the sort but la small and runs along the top of the fence beside the road! The general opinion is that the shape is clothed in filmy white, but one story has it that a flaming red garment was worn on one occasion. Still another yarn, relayed from mouth to mouth, swears that there are two of “them” and that “they” were seen wrestling in a field.

Spooks: They Make Horrible Noises and Disturb the Peace

Tupper Townsend, night clerk at the Arlington house, is a man of iron nerve, but he is gradually getting the horrors from the effects of various frights given him by the spooks, who idly gambol up near Albertus Swaine’s furniture factory.

Frequently, about 3 o’clock in the morning, Townsend says just across the railroad, and near the above designated place, he can hear a pistol fired, and then a succession of shrill yells that make one’s hair bristle to hear. He has no way of accounting for the unearthly disturbance and says that every morning after its occurrence he expects to hear of someone being, murder.

Last night the screams were so loud and protracted that even Mr. Iliff, awakened from bland and child-like sleep, heard them.

Haunted houses have belonged to the dark ages, or if heard at all, the present time are generally found to be inhabited by persons of ignorant and superstitious ideas who could easily believe that darkness was light and falling meteors were the very stars themselves. But when we hear of what would seem to be a genuinely haunted house right here in Richmond, occupied by persons of high respectability, we are inclined to doubt if ghosts are all either white sheets or guide posts.

Mr. T. W. Classon and family have lived for the last three years, at No. 529 North 17th street. It is the north half of a large double house. Nothing marred their peace until a few months ago when peculiar and mysterious disturbances began to take place in the way of rapping and heavy poundings.

These were treated at first very lightly and when “ghosts” were, suggested by some were laughed away in the most skeptical manner. Then a careful and full investigation was entertained but with no result.

The noises come with three peculiarly quiet poundings then no more. At times lightly, then again very heavy, steps are plainly heard coming up the cellar-way, and the door to open. The cellar door opens against a small pantry door in such a way that when the latter is shut the former cannot be opened, the two lock coming together; we examined the doors carefully and found them closed; they were fast as if bolted to the wall.

With the pantry door shut the cellar door is hard to move and the family on rushing to the spot find the door wide open; we are told by Mrs. Classon that this has occurred many times. The peculiar rounding came so heavy the other day that neighbors in the next house hurried in, having plainly heard them. The noises are located in the cellar, stair-way, and work on the board partitions that separate the two sides of the house, and affect the south half of the house the same as the north.

The Classons are first-class respectable people not given to foolish belief, whose integrity we cannot question. “There is a mystery somewhere.” Let those of alleged scientific learning who ridicule and sneer at ghost stories, please explain or clear this mystery that is becoming the talk of an intelligent community.

Have you ever seen or heard something ethereal? Did your cousin see a ghost? I’d love to hear your story! Leave it in the comments and maybe in a hundred years it’ll get republished, too.